When plush and extremely expensive city centre apartments began appearing in many British cities at the beginning of this century, it was as if planners and developers were trying to change the face of our traditional centres of trade. 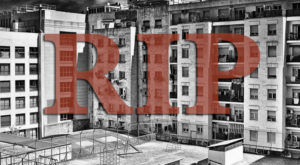 But following the property price crash in 2008, many who had bought these city centre apartments found themselves owning assets that were worth significantly less than they had paid.

For the more experienced investors this was not such a major problem. After all, they had bought these properties with the intention of holding them for a period of at least 10 years.

They had a good idea that while prices had momentarily dipped the properties were essentially profitable, generating a good cash flow and with fewer void periods.

But those investors who had bought at the peak of the market with very little equity and those who were relying on an increase in property values to prop up their investment, found themselves either selling at a loss or supplementing the mortgage in an attempt to hold on to their property. As a result, many novice landlords found themselves having their flats repossessed.

This caused a backlash from property investors, who in many cases decided that they would only be investing in houses from this point on.

In the seven years since 2008, there has been a significant period of readjustment and realignment.

As a result of overall market conditions, supply and demand and most importantly the restrictions that lenders now place on a new-build flats, luxury apartments in city centres are now much more sensibly priced.

The better developments in central Birmingham, for example, continue to rent out exceptionally well with good demand from tenants. Some of the less desirable development or those where the surrounding areas remain largely undeveloped have suffered a pinch on the rent and their prospects of resale remain poor.

But here’s the good news. In some of the outlying areas of Birmingham, such as Digbeth, investors can pick up a bargain property that will rent well, offer a superb yield and has scope for capital appreciation.

Landlords with a limited budget can still find a decent property to buy to let in Digbeth. Typically, one-bedroom apartments can be purchased for just under £100,000 in some developments such as the Abacus Building.

The one-bedroom apartments here can be rented out for around £625 per month. This generates a yield of around 7.5%.

The downfall of flats is that their running costs include a ground rent and service charge. Flats in the heart of Birmingham city centre command higher significantly higher ground rent fees because the price of the land they are built on cost more.

While ground rent is not normally the highest cost for a landlord, service charges must be taken into account when calculating yields.

The service charge is often determined by the number of luxury facilities, such as lifts and concierge service. If you find a development that does not have a concierge and only a modest number of lifts, your net yield will not be too far adrift from your gross yield.

In terms of the scope for longer term capital appreciation, you only have to look at the areas around these apartments to see that there is tremendous scope for further redevelopment of the area.

Many of the properties remain vacant or with plans for redevelopment still in the pipeline, shops remain empty or awaiting commercial tenants but yet so much redevelopment has already gone ahead and there are already a huge variety of already successful attractions, which makes Digbeth a desirable place to live.

Custard Factory plays host to a variety of unique bars plus an eclectic music scene. Nearby, there is also a thriving pub scene including a number of real ale pubs and of course the Irish Centre.

You’ve got to think that this generally bodes well for the area and leaves significant room for growth of the property values over the medium to long term.

How to Find The Best Commercial Space For Your Business