We’ve all had moments when our eyes nearly jump out of their sockets after being presented with an electricity bill. 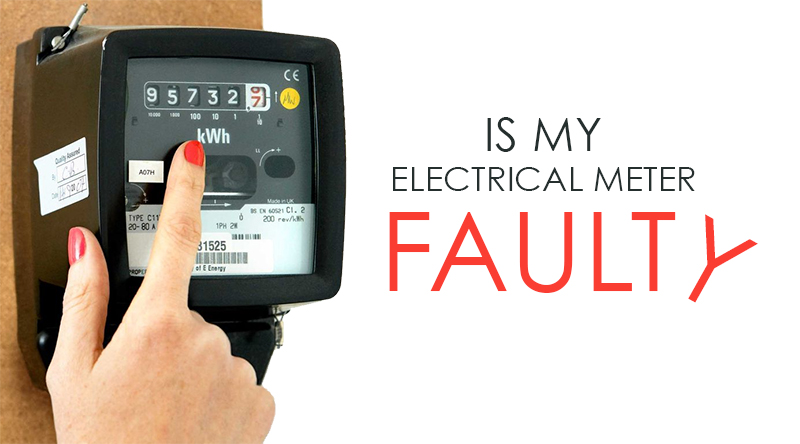 When a bill seems much too high, one of the first things many homeowners and tenants think is that there must be a problem with the property’s meter.

While problems with electricity meters are uncommon, they are not unheard of and can place bill payers in a position of shelling out for electricity they simply have not been using.

It’s worth noting that the opposite is probably worse – if your meter has stopped or isn’t moving as quickly as it should you could find yourself in a position where you then face a huge bill later down the line to pay back the company for the extra energy you used.

So whatever the problem is with your meter, it’s important to resolve it as soon as possible. But before you can work out whether the meter is faulty or not, you’ll need to understand how to read it.

How to read your meter

Reading your electric meter correctly is vital as most electricity companies expect you to submit accurate meter readings to them to calculate your bill. There are three types of meter that you are likely to have in your home.

A single rate digital meter is probably the easiest to read. It will contain five numbers in black and white and you must simply write down these figures from left to right ignoring any other numbers visible.

A dual rate digital meter is similar, except that there will be two sets of five numbers – it indicates that you are on a tariff that provides you with cheaper electricity at certain times of day. The top row (labelled ‘night’ or ‘low’) shows the amount of cheaper electricity you have used, while the bottom row (labelled ‘day’ or ‘normal’) shows the amount you have used at the standard rate.

It’s possible that you will have a dual-rate meter that only shows one rate at a time. In this case you would need to press the button on the side to cycle through the two different rates. Again, these numbers should be written down left to right.

The third meter is a dial meter. These meters have five dials numbered 0-9. Again the dials should be read left to right and you should ignore the dial marked 1/10 if there is one. Starting with the first dial, write down the number that the pointer has passed even if it is closer to the next number. If the dial is pointing exactly at a number, underline it. Repeat this for all five dials.

How to check / Identifying the problem

It is up to your energy supplier to fix a faulty electric meter but they are very to send out a technician on your assumption that it seems wrong. Before you call them to sort it out it’s worth running some of your own tests to make sure there is genuinely a problem.

Your first move should be switch off all your appliances at the plug to check whether the meter’s display still moves. If it continues moving and you are certain that no appliances are running this indicates there is probably a fault. You can then call your energy supplier and tell them about the test that you ran.

If the meter stops working entirely, you can then start switching items on one at a time. If you notice the meter moving very quickly this could mean that it has a fault. Once again, in this case it is then worth contacting your supplier to explain the problem.

Finally, the problem could be with a specific appliance. This is more time consuming to test and should ideally be done with more than one person. You can turn off all appliances, then switch one on, check how fast the meter moves, then turn the appliance off. You can repeat this process with all your appliances and if one of them makes the meter move especially fast, you have probably identified the culprit.

If no appliances show up any problems then it may be the case that the bill is correct and your consumption has changed. You can still request your energy supplier to send out a technician, but it’s worth noting that if they find that there is no fault they may charge you for the call out.

How To Build a Functional Home Gym in Small Spaces

Roof Maintenance Tips: How to Extend the Lifespan of Your Roof