Despite university fees rising as high as £9,000 per year for some institutions, the amount of students going to university hasn’t slowed down, and if anything there are even more people heading off to study. 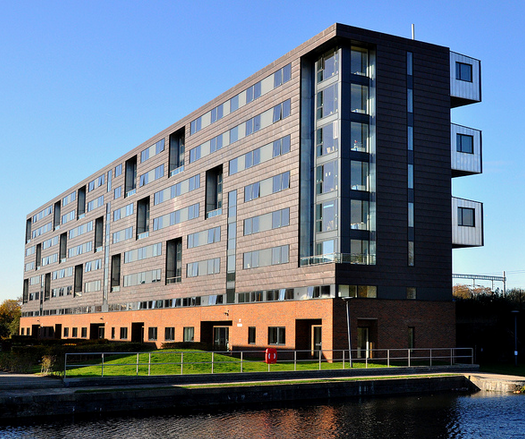 And with many of these students coming to Britain from overseas, often backed by wealthy parents, it’s good news for investors in student housing!

The UK is experiencing record numbers of students being accepted onto higher education courses, and it doesn’t seem like slowing down.

This is partly because the UK is an extremely popular place to study for overseas students, who are drawn here by the world-class reputations of Britain’s universities and the opportunity to immerse themselves in an English speaking environment.

Universities are struggling to cope with demand

With more and more students coming to study here in the UK, the universities are struggling to build accommodation quickly enough, and in some cases students aren’t even guaranteed a place in halls.

Some universities have been granted extra places to try and ease the burden, but the fact remains that there simply isn’t enough housing for many students, and there have even been reports of some institutions having to put bunk beds in their rooms to accommodate as many students as they can.

This means that many students are opting to live in privately owned accommodation in their first year, sometimes in properties which are run by the university, but still owned by a private buy-to-let landlord.

Student accommodation is one of the best performing asset types

While the property market as a whole has fluctuated following the global economic crash of 2008, student accommodation has consistently performed fairly well.

This is because there is a constant stream of demand for housing in this sector, with more and more people going to university.

In London, where there were an estimated 359,990 students for the 2014/15 academic year, some students are paying as much as £600 per week for their accommodation.

If you went to university yourself a number of years ago, you may have an image in your head of student accommodation being tiny, dirty, and not very nice places to live.

While in some cases this may still be true, the modern day student is changing, and so are their demands for accommodation.

This means that students are spending more time in their accommodation studying rather than going out, and as such, they prefer to be in a more modern building with more luxury mod-cons.

We spoke to Joanne Gilbert of contemporary student housing providers Bellvue Students, who told us: “When you’re spending that kind of money on your education, you don’t want substandard accommodation.”

“While today’s students still enjoy going out and having a good time, they certainly have more of an eye on getting more out of their degree, and this means they’re prepared to spend a little more on better accommodation.”

Of course this depends on exactly the route you take, but student properties can be fairly easy to manage.

If you work with the university or a letting agency, finding new tenants every year can be taken care of for you, and as we’ve pointed out, the demand is so high that you’re unlikely to face much trouble finding any.

Student houses are also fairly easy to sort out in-between tenancies, and simply require a lick of paint and a bit of work to be ready for a new tenant.

An increasingly popular choice is to invest in a number of ‘pods’ or rooms in a large city centre apartment complex, which are fully managed and taken care of on your behalf.

Of course, investing in student accommodation isn’t necessarily for everyone, but the market is certainly growing, and it can be hard not to get drawn in by the attractive possible returns!

If you are thinking of investing in a student buy-to-let, why not check out this list from The Telegraph looking at the top ten cities to see where you might stand to make the best return on your investment.