The UK’s largest city certainly has its fair share of exciting places to live: from the bright and bohemian, to the classy and more upmarket, London’s got it all.

Are you trying to decide where to settle in the city? Are you looking for somewhere modern, interesting and full of character to live? With so many options available, narrowing down your choice may seem like a daunting challenge. So with this in mind, here are just five of the many potential destinations to consider along with the average rental prices in the area.

One of the capital’s major business districts, located in the east of the city, Canary Wharf is a clean, modern hive of activity. With central London just under eight miles away, you’ll never be far from main city life, and of course the River Thames is on your doorstep too. Major banking headquarters and established organisations, such as Barclays and HSBC are based in the area, which contains near to 14,000,000 square feet of office and retail space.

Home to some of the UK’s tallest buildings, including One Canada Square, around 90,000 people work within the Canary Wharf district. For those who work in the finance sector, relocating to the apartments and modern flats in Canary Wharf could be an ideal choice for you.

Switching to the other side of the capital, Maida Vale is a residential district situated in the North West. Renowned for its large Victorian style housing, wide tree-lined avenues and the BBC Maida Vale Studios, it’s a great choice for those who wish to escape the hustle and bustle of main city life and retreat away from the centre for a while.

Famous faces to have graced this part of London include the World War code breaker Alan Turing, Olympic gold medallist Bradley Wiggins, international model Kate Moss and lead singer of the Jam and The Style Council, Paul Weller. With the Little Venice canals on your doorstep, Maida Vale is a great destination during the summer months, as you can really explore all it has to offer whilst the sun is shining. 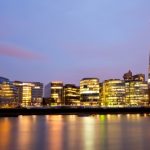 A central location in every sense of the word and situated alongside the River Thames, London Bridge has all you need. Southwark Cathedral, Borough Market and the Tate Gallery are cheek by jowl with an abundance of modern apartments, and there’s great shopping at Hay’s Galleria, along with plenty of restaurants for entertainment during the day and the evening.

The Shard is London Bridge’s newest and tallest building offering amazing views across the city. If you are relocating due to securing a job in one of the top financial and business districts, then London Bridge is the perfect central location to live. With stunning architecture and easy transportation networks, it’s one of the most vibrant areas of the capital.

To the north of London is the world famous Camden town. For those who are into alternative culture, this location may well be the ideal dwelling. Famous for its music venues, quirky shops and Camden market stalls, this part of London will offer you something completely different to the city centre, with more character and diversity.

If you favour an individual setting full of character, over the modern ways of central London life, then you will probably be interested in living in Chalk Farm and Mornington Crescent. Based on the Northern line, you’ll be close to popular surrounding areas such as Hampstead Heath, Kentish Town and Belsize Park.

Last on the list is Chelsea, one of the most affluent areas in London (check out this and Chelsea Wharf Residences as an example). With a number of properties in the higher price region and neighbouring Fulham on the doorstep, you’ll be sure to find modern and luxury apartments and houses within the borough of Kensington and Chelsea.

Every place in London has its own individual character, so if you like the finer things in life, then make sure you check out what Chelsea has to offer. The prices in Chelsea can reach an eye-watering £5,000 a week for a two bed flat, so it’s not the area for everyone!

The area is considered to be similar to the Upper East Side in New York and according to The Independent, average house prices are over 1.3 million (Accurate as of June 2012).

This guest post was written on behalf of  Madley Property, an independent Estate Agency who specialise in lettings, management, sales and modern developments within central London.