Council tax is something we all have to pay to cover things such as rubbish collection and pay for the police, fire and other local services in your local authority.

It would make sense for all council tax bills to be the same, depending on what band you are in, however, new research reveals that not all council taxes are equally expensive and some areas are paying £1,300 more than others.

The research from Coulters Property looks at Band D council tax prices around the UK to reveal the UK’s lowest and highest paying council tax areas and it’s rural areas who are paying the price, while surprisingly Londoners have some of the cheapest council tax bills.

Band D prices were looked at, as according to the government band D “is the standard measure of council tax” as all other bands are set as a proportion of the band D. 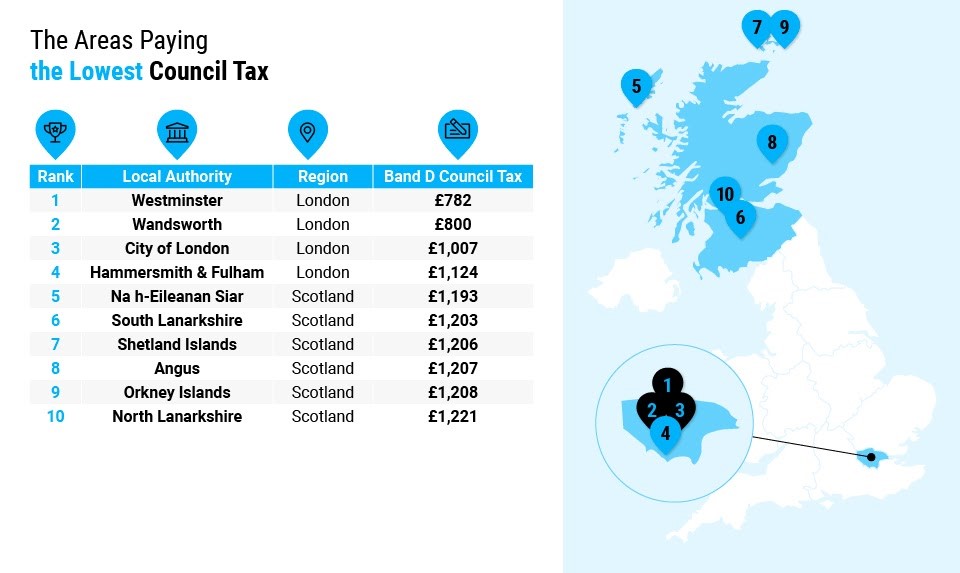 While it’s no surprise that London has some of the most expensive house prices in the country, it is shocking to find out it’s home to the four cheapest council tax areas.

In fact, Westminster has the cheapest council tax bills in the country at just £782. Wandsworth comes in at second, costing £800, The City of London third at £800 and Hammersmith and Fulham the fourth cheapest at £1,124.

The next six areas with the cheapest council tax bills were all found in Scotland, including the Orkney Isalnds.

It’s residents in rural areas who are slapped with the highest council tax bills. Rutland, the UK’s smallest county and home to just 40,000 people, pays the highest overall, at £2,125 for a band D property which is 17% more than the national average.

Rutland is followed by Dorset and Nottingham, which both pay £2,119.

Quirks in the council tax system and calculations based on the value of your home from 1 April 1991 which make the outcome differ everywhere.

You can see the full research here: https://www.coultersproperty.co.uk/council-tax-index