How much is your garden worth? New research by over 50s insurance provider RIAS reveals that Great Britain’s gardens are collectively worth a whopping £9.3bn. 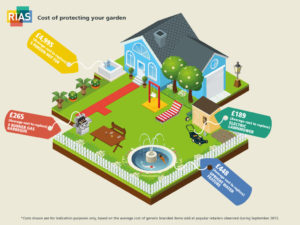 The insurer’s Cash in the Garden report reveals that…

Homeowners often go out of their way to protect their houses from burglary, but a large majority fail to take out the equivalent security measures on their gardens.
The most expensive and popular garden items include; sheds (£189.98), greenhouses (£189), summer houses (£479), solar panels (£700) and hot tubs (£2,000).

The research by RIAS also shows that in Wales and south-west England, the average annual spend on gardens per household is £216.78. This region has the highest average price per garden across the UK, and the over 50s age group spends an average of £284 per garden each year.

Janet Connor, managing director at RIAS, comments: “As the over 50s get their homes back to themselves once again or move towards part-time working or retirement, their gardens really are becoming their sanctuaries, with lots of time and money being ploughed into their maintenance and upkeep.

“And it’s this value of just over £5,000 per household that needs to be protected, with garden sheds becoming a treasure chest of gardening gadgets.”

Protecting your garden from theft

There are a number of ways to prevent your garden from being a target for criminal activity.
Investing in garden insurance is advisable if you have valuable assets outside your property. In Scotland, residents were found to be the most security savvy, with 56% of those surveyed making sure their gardens are covered by household insurance.
In most cases it is also worth investing in secure fencing, gates and security cameras to protect items such as bikes or expensive pieces of furniture.
Other recommended tips include hiding or locking away valuable items, securing plant pots with wire or cement and marking items with your postcode. Using gravel in your garden is also thought to deter thieves as it makes it easier to hear someone approaching your property.

“My grandma had stone flags stolen from her garden on three occasions which left gaps in her patio. When this kept happening she had to buy an electric gate and security camera to make sure her property was protected” Sophie Marsden, Halifax

“My housemates had two bikes stolen when I lived in York a couple years back. One was taken from a locked shed and the second from a shed with a destroyed lock.” Luke Lawley, York

Clothing from washing lines was also found to be another popular target for thieves.

“I had just bought new clothes for my birthday and after the second time I wore them my mother put them in the garden to wash. During the day some people must have gone through the garden and stolen them.” Tariq Ahmed, Barnoldswick

“My mum woke up and found that a few items of clothing had been stolen from her washing line during the night, including a Sheffield United T-shirt.” Fiona Ward, Harrogate

Among other acts of garden burglary, it was also discovered that thieves have gone as far as to steal pets from gardens.

“When I was 12 years old my pet rabbit, Tiger, was stolen from his hutch.” Luke Fletcher, Wakefield.

“My parents had Koi Carp stolen from their fish pond. This happened in other areas of our neighbourhood too, until the police got involved and some fish were eventually returned to their owners.” Guy Sharman, Leeds

At the other end of the spectrum, an anonymous source remembers taking furniture from other people’s gardens.

“When I was a teenager, we found it funny to recreate someone’s garden in their neighbours. I remember that we stole someone’s bench and other garden items and put them in someone else’s garden. As well as taking the For Sale board and putting their neighbour’s house up for sale.” Anonymous, London

These revelations show how important it is to keep your garden valuables safe so that you don’t end up spending more money in the long run. If you would like to find out more about the Cash in the Garden research, visit the RIAS website here.