When it comes to keeping you and your family safe at home, the possibility of a fire in your home is often top of mind. 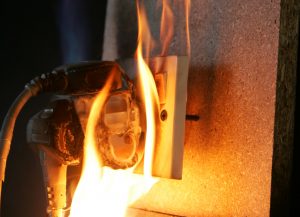 Although rare and for the most part able to be avoided, when fire does strike it can be a menacing sight and leaves thousands of people each year heartbroken, injured or even worse.

Knowing how to minimise risk factors involved with electrical fires can go a long way in reducing the risk. Few homes are equipped with a fire extinguisher in the event of fire, particularly an extinguisher capable of dealing with electricity-based blazes.

Although imitation electrical chargers for devices such as mobile phones may be up to 99% cheaper than their genuine counterparts, they could end up costing you a lot more in the long run. Some imitation chargers may be unsafe and an instant fire hazard the moment they are used.

Keeping appliances clean and working is not just a show for presentation or usefulness. This maintenance can also reduce the risks of electrical fire greatly.

A common sight in many homes is plugs in sockets and switched on when not in use. There is a constant electrical charge making its way from the source which increases the chances of fire as well as wearing the plug and socket out over time. This idea is particularly useful when it comes to hair straighteners.

They can get very hot and should always be left to cool on an appropriate heatproof surface after being switched off.

Phone chargers should not be left on overnight. It doesn’t generally take eight or even more hours to fully recharge a mobile phone. The risk of overheating is greatly increased and your phone and charger are being put under unnecessary stress from the excessive amounts of electrical energy being pumped through them.

Use the correct plug

Sometimes appliances are sold without a plug or a plug needs replacing. It may be tempting to find a plug somewhere in the home that will fit. Be careful and ensure that the plug being used is of the correct fuse and power as the wrong type will increase the risk of fire.

One plug per socket

Plug sockets are designed to accommodate only one plug at a time. Where possible, adaptors which increase the numbers of plugs that can be used should be avoided. If they must be used, seek an ‘in-line’ adaptor. These adaptors are restricted in how much power they can provide and can reduce electrical fire risk.

Following these steps will not eradicate the danger of electrical fire completely but will give your home and your family a much better chance of avoiding potential danger. Remember, overloading power sockets, extension leads and untested appliances can all lead to peril. Be sure to regularly check for fire hazards and do whatever you can to nullify any potential threats you find.

How To Maximise Your First Property Investment As A Landlord