Recognised worldwide as a leader in design and architecture, London’s landmarks routinely draw tourists from across the world each year. From the iconic to the sustainable, a new interactive tool takes a look at decades of regeneration projects in the capital that are continuing to add to the city’s renowned architectural landscape.

The London Regeneration Fund has pledged to spend £20million on ‘breathing new life’ into the city which means we’ll continue to see extravagant property developments and towering offices breaking up the skyline for years to come. With the promise of further developments across the city, this is an exciting time for landlords with opportunities on the horizon for some exemplary buildings with decades of history.

Housebuilder, the Berkeley Group, has launched a new tool called Patchwork London which delves into the backstory of development in the city, noting some of the key areas of property regeneration and how much change the city has undergone over the years.

We’ve explored some of the most iconic regeneration projects in London over its 2,000 year history, including the Olympic Park, Kings Cross, London Docklands and Battersea Power Station. 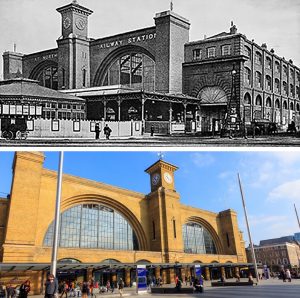 Situated in the borough of Camden, King’s Cross station has a breadth of history, it has even been proposed as the location of the battle between Queen Boudicca and Roman soldiers, with some believing that her final resting place is under Platform 9 in the station.

King’s Cross station has undergone extensive regeneration and construction work in recent years, including the extension of St Pancras Station. With £2.5 billion invested in to the area and transport infrastructure, the regeneration of the London station and surrounding area has created 10,000 jobs and added £600m in annual value to the economy. 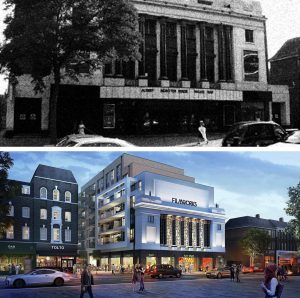 Over 200 homes centred around an open piazza, an 8 screen Picturehouse cinema, and a variety of restaurants, community facilities and shops including Planet Organic and Vapiano will be created at the new Ealing Filmworks development.

Originally built in 1934, the Empire Cinema in Ealing town centre, which was designed in Art Deco style, later closed in 2008. Bought in 2016 by St George at Berkeley Group the redevelopment of the historic building will see the façade with the columns and cast-iron detailing retained. 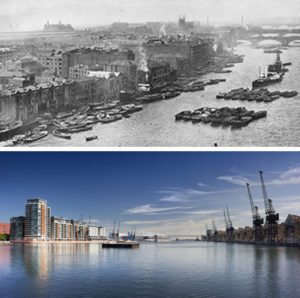 Between 1980 and 1990, a huge development programme took place at the eight-square mile area of London’s old docks. They were closed in the 1960 and 80s, leaving an expanse of derelict land that has now been transformed into commercial, residential and industrial areas by the London Docklands Development Corporation (LDDC).

The regeneration project has had an extremely positive effect on the neighbouring areas, including Deptford and Greenwich which are now more accessible and have become popular commuting and redevelopment destinations. 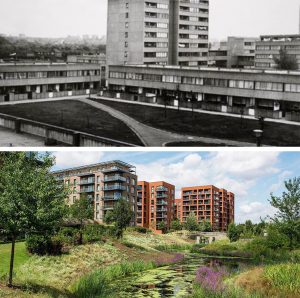 Located in the Royal Borough of Greenwich, the land at Kidbrooke Village is bursting with history. During 1961 the Royal Flying Corps established a military base close to the station in Kidbrooke and the RAF continued to use the area until 1965 when the land was released to the Greater London Council (GLC).

Nine years later the construction of the Ferrier Estate began of homes built using inspiration from the modern style of the time, using concrete panels that were manufactured onsite to speed up the building process.

During the 1970s the complicated design of the estate made it difficult for police and led to safety issues. In 2007 Berkeley agreed a partnership with Greenwich Council and the Homes and Communities Agency (HCA) to create a new vision for Kidbrooke — Kidbrooke Village.

Kidbrooke Village is one of the biggest residential developments in London, due to be fully completed in 2030 and costing an estimated £1billion. The area is made up of four neighbourhoods and surrounded by 86 acres of open parkland. The waterways at Cator Park are known as a haven for wildlife, and these habitats have been protected in partnership with the London Wildlife Trust. 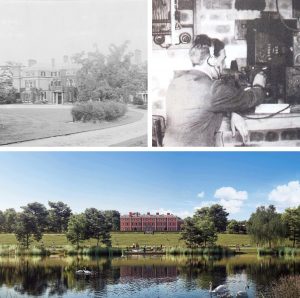 Also known to be some of Henry VI’s hunting grounds, the grounds at Trent Park in Enfield date back to the 14th century with 413 acres of parkland. Used during WWII as a site for MI9 to gather British intelligence and hold captured German soldiers the park is surrounded in woodland, lakes, and wildlife.

The park is undergoing regeneration with the Berkeley Group building a mix of new build and restored homes as well as a museum within the Mansion House. Other facilities onsite for residents to use will include a shuttle bus to Oakwood station, gym, outdoor swimming pool and tennis courts.The current phase at Trent Park is due to be completed at the end of 2019.