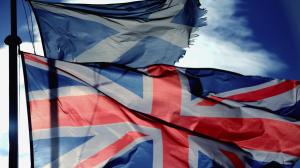 What a mess! With no one in Westminster having previously entertained the possibility of a “Yes” vote from Scotland when they go to vote for independence in a few days’ time, the closing of the gap between the two camps has seen Westminster dissolve into absolute panic mode. We’ve been forced to witness the rather undignified spectacle of Prime Minister David Cameron trotting up to Scotland to beg the Scots to vote “No” and seen him (kind of) swear on camera, begging voters not to vote for independence just to ‘give the effing Tories a kick’. All rather infra dig, n’est-ce-pas? Particularly from a PM who went to Eton, a school which allegedly bestowed on him the fine gifts of decorum, resilience and a cool head in a grand crise. With humiliating blunders from panicking politicos left right and centre who are desperate to secure the vote they want; we’ve even seen the likes of failed ex-PM Gordon Brown (yes, Gordon Brown) being praised for his rallying speeches and management skills when it comes to trying to keep the UK intact.

Even the PM’s most firm allies seem to have left him – with editorials across the board traducing the political class. Indeed, you would be forgiven for asking as to whether there’s any shred of dignity or competence left lurking in the nethermost caverns of the Westminster machine, which seems to currently be doing a remarkable job of dismantling any ounce of democracy this country has left.

So while we’re on the brink of a full constitutional crisis – with the average English taxpayer slowly realising that potentially a “Yes” vote would actually be more in his/her interests as a “No” vote would likely come with a whole raft of new promises of money and power at the expense of the English; we thought we’d have a look at the possible ramifications of the former – starting with – surprise surprise – house prices…

Chancellor George Osborne has made it clear that keeping the pound is not an option for Alex Salmond; meaning that if a new independent currency floats on international markets millions of homeowners could see their monthly payments increase. This is because they’d be exposed to foreign exchange rate risks, with a nightmare situation emerging for those with mortgages in sterling. South of the border, with lower national output (Scotland makes up some eight percent of GDP) the rest of the UK’s debt to GDP ratio would actually rise and may lead to higher borrowing costs – and higher interest rates. On the other hand, some experts have suggested that it would be hard to imagine the Bank of England sanctioning higher borrowing costs if this would hit the economy. Overall, we’re an optimistic lot here at Williams Lynch and although there may be an initial shock, we believe house prices will still remain buoyant. This is because property is still in short supply – especially in London and there are more and more people looking to move here each year as the geopolitical outlook is unstable.

The Bank of England’s Governor has confirmed that contingency plans have been drawn up following warnings of a run on Scotland’s banks if the country decides to vote “Yes.” Uncertainty could cause financial turmoil – with Nomura, Credit Suisse and Saxo Bank all stating that Scotland will be plunged into a massive recession, with salary cuts and unemployment. These are international banks, so could be viewed as neutral which means their views are likely to be credible. Nomura has begun advising its clients to withdraw funds from the UK until after the poll in case the pound were to suffer a downturn in value.

Although many businesses and member organisations are keen to remain impartial on this issue; it’s clear that an independent Scotland would have a potentially negative effect on business. Many businesses like to steer clear of this subject: insurance company Standard Life said it was going to transfer some operations out of Scotland and was heavily criticised. Changes in the currency could increase transaction costs for companies trading, investing and spending across the border and could also affect business-to-business transactions between wholesalers and shops.

These are just some of the implications of a “Yes” vote for Scotland. We’ll have to wait and see as to how things unfold – Keep posted for a further evaluation after the vote’s been held.

Why is Debt Management so Important?