Student property has risen to become one of the UK’s best-performing investment assets. 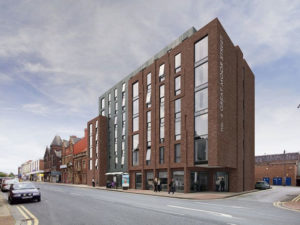 However, while investors have focused the bulk of their attention on well-known student markets such as London, Birmingham, Manchester, Oxford and Cambridge, this has left some strong alternatives rather under-appreciated.

Student property investment in Bolton, for example, is a market with a lot of potential. The former mill town in north-west England may have a population of more than 250,000 but the fact its university was not established until 2006 means its student market is often overlooked.

Bolton is just over 12 miles from Manchester and was a powerhouse in the industrial revolution.

Though England’s textiles industry has all but disappeared, the town retains a strong economy after a successful transition to focus on service sectors.

A large part of Bolton’s attraction as an investment destination comes from its future potential. Bolton is currently poised for significant development, as its central location and strong economy have served to attract local, national and international investment for growth.

Bolton is one of the key beneficiaries of the regeneration efforts taking place across Greater Manchester and the surrounding area.

Over £1bn of public and private investment has been made in Bolton. A number of major projects and initiatives are set to take place in various parts of the student investment property sector, and a noticeable increase in yields has already been seen with growth of 2.1% in the past year compared with only 2.5% in Manchester.

Unlike the bigger and more popular student markets, such as its neighbour Manchester, Bolton is only home to one university of its own.

However, this is enough to bring a respectable student population to the town and to place suitable properties in the vicinity of the university in high demand.

In fact, it has been reported that developers behind the expansion of one luxury student accommodation building in Bolton hope their plans will act as a catalyst for town centre growth.

And with investors and developers taking less interest in providing such properties than in some bigger markets, there is plenty of room for those who do enter the market to successfully stake out a territory.

It’s not just the University of Bolton which brings a student population to the town but also the three universities in nearby Manchester.

Manchester’s student housing market is so under-supplied that rents are becoming increasingly unaffordable. This is why a growing number of undergraduates are choosing to live in nearby Bolton.

For many, the increased accessibility and lower prices are well worth the 30-minute travel time, and this means that the pool of potential student tenants in Bolton is greater than the town’s own university could provide by itself.

Essentials to Know Before Buying A Property in Nantucket