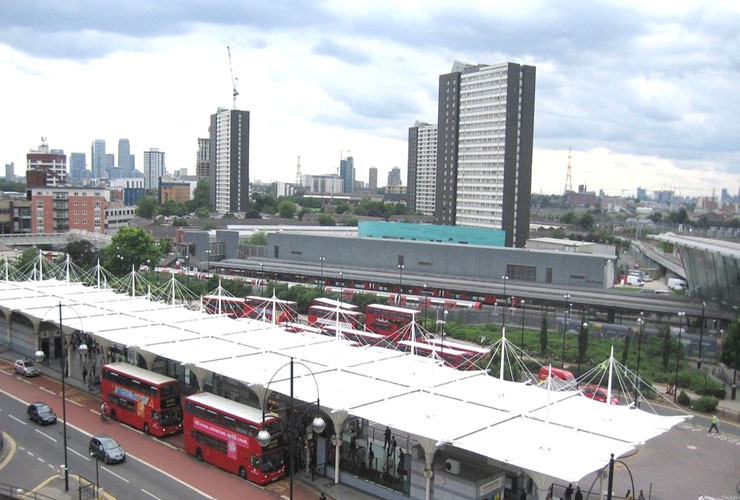 Fast, frequent rail, tube and tram links are the lifeblood of any business district’s prosperity, and the fact Stratford in east London has no less than 10 public transport lines feeding into it – which allow 200 trains to arrive in this part of the capital every hour –  is a key factor in the Olympics host borough’s regeneration.

And the announcement that Stratford’s three stations are to be moved from Zone 3 to Zone 2/3 promises to “accelerate growth, bring additional investment and visitors and create much needed jobs and homes” to this part of London that is just six miles east of Charing Cross.

While the decision to host the 2012 Olympics was the catalyst for the upgrading of Stratford’s transport infrastructure, work to improve journey times to central London was complete long before the Olympic flame was lit.

A total of £6.5bn has been invested to make Stratford a key transport hub for London and give it direct access to 150 tube stations, while the remainder are within just one interchange.

Stratford International Station is served by High-Speed 1 – the UK’s only high-speed domestic commuter line, which cuts the journey time to and from the Eurostar terminal at St Pancras to just seven minutes.

The International station also serves Ebbsfleet, which provides a connection to Eurostar services from France and Belgium without having to go into central London.

But commuters are not just profiting from better tube and high-speed rail links. Stratford Regional Station, which is on both the Central and Jubilee tube lines, provides regular overground services to Liverpool Street Station, East Anglia and other routes around the southeast. The East London line, for example, opened in May 2010 and links 21 stations from Dalston Junction in east London to West Croydon and Crystal Palace in the south, while the North London Line now connects Stratford with Richmond in Surrey.

The fact that Stratford is the ninth busiest station in London and the 12th busiest in the whole of the UK is not lost on Transport for London, which has announced it will relocate its headquarters from Westminster to a 250,000 square foot office in the new International Quarter that is being built on the Olympic site.

The new business district, which being developed between Stratford station and the Olympic Park, will provide 4 million square foot of office space when complete in 2018 plus a hotel, 350 homes, three acres of open space and more shops and restaurants.

TfL’s announcement follows a similar move by the Financial Conduct Authority, which is also relocating staff from Canary Wharf to a new 425,000 square foot headquarters in the new International Quarter.

Before any of the new tenants of International Quarter open for business, TfL will move Stratford to Zone 2/3 in January 2016 after a report from the Centre for London think-tank claimed its placement in Zone 3 was fuelling perceptions of the area as “suburban, distant and undesirable”.

It suggested moving the area’s stations into Zone 2/3 would boost visitor numbers to the Olympic Park by tackling perceptions that it is ‘too far away’.

At the time of the announcement in July 2014, Newham mayor Sir Robin Wales, commented: “I welcome the announcement today to rezone stations in Stratford. This provides long overdue recognition that London is moving east and there is much more to do.

The benefits of improving an area’s transport infrastructure are not lost across the city in Wandsworth. Ambitious plans to regenerate Nine Elms in south-west London that are currently underway have been compared with the turnaround of Canary Wharf in the late 1980s.

They both have a similar footprint and singular purpose as new ‘quarters’ (diplomatic and financial), are on under-valued river frontages, benefit from improved transport links and feature major new office developments.

About £15bn of investment is pouring into Nine Elms, making it one of the largest regeneration projects in Europe, easily eclipsing the £9bn cost of the 2012 Olympics site in Stratford.

But the ambitious plans to regenerate this part of south-west London would have stalled had plans to build a 3km extension to the Northern Line connecting Battersea to the tube network not received the go-ahead in November 2014.

At the time, Wandsworth Council leader Ravi Govindia said: “This is fantastic news and the benefits will be felt right across the borough. This part of London is already coming to life with thousands of new homes and jobs and its two new tube stations will turbo-charge the process.”

By the time the Northern Line extension connects Battersea with the tube network in 2020, Stratford’s residents and the thousands of workers who will descend on International Quarter each day, not to mention the football fans who will be watching West Ham United play home fixtures in the converted Olympic Stadium from the start of the 2015/16 season, will have already benefitted from the economic prosperity great transport links invariably deliver.

Click here to discover how Stratford is becoming a centre of excellence for education and culture.