According to data released by Nationwide Building Society, house prices grew by just 0.2% in April, a far cry from 0.7% in March.

The poor result in April reduced the rate of annual growth to 4.9 percent from 5.7 percent in March. This came after property sales in March, which amounted to 165,400 transactions, surpassed the previous all time high set in January 2007, according to data provided by HM Revenue and Customs (HMRC).

Nationwide Building Society attributed the flurry of activity in March to the increase in stamp duty on second homes that took effect from first of April. However, a study by the Royal Institution of Chartered Surveyors showed that demand for commercial property was at an all time low. The study attributed this decline to the potential UK exit from the EU.

This is hardly surprising. An earlier study published by PwC and Urban Land Institute reported that London slipped out of the best city to invest in property for the first time since 2012 in 2016.

However, this doesn’t necessarily mean the UK property market is on a downward curve. Pantheon Economics, referencing their chart below, expects that the pace of growth will pick up from here. They point to discrepancies in various measures of UK price growth to buttress their point.

Nationwide’s report also suggests that they view the slowdown in April more as a normalizing effect than as a downward turn in the UK property market.

Robert Gardner, Nationwide’s chief economist, said that “this slowdown returns the annual pace of house price growth to the fairly narrow range between 3% and 5% that had been prevailing since the summer of 2015.”

However the average price of houses in the UK rose in April compared to its price in March. While this increase might be a leftover from the increased demands in March, it could also be due to strong job growth and increase in real wages, low borrowing cost and reduced supply.

Is Brexit a Factor?

PwC and Urban Land Institute in their published report Emerging Trends 2016, attributed the fall of London from the top 10 cities to invest in Europe as a strategic move by investors. Some investors now consider the London property market “too hot to handle” due to high cost of properties and marginal return on investment. They argue that investors are now considering regional UK cities where prices and return on investment are better for investment. This is backed by the fact that Birmingham City rose 14 places to become the sixth best city to invest in Europe in 2015 and maintained that spot this year.

Nationwide’s Chief Economist, Robert Gardner, made no mention of Brexit in his press release.

Royal Institute of Chartered Surveyors however, concluded from their study that the uncertainties concerning Brexit have significantly affected demand for properties by foreign investors.

Foreign buyers currently account for more than half of home sales for homes worth over £1m. Moody, a rating agency, suggests that a drop in foreign nationals due to Brexit will reduce the demand for houses which will consequently drive down cost of rent and increase vacant period.

This will significantly affect Buy-to-Let investors who as lending data shows, accounted for a significant portion of the flurry of activity experienced in March. Mortgage lending to Buy-to-Let buyers might account for up to 25% of all lending in March.

However, Moody also expect that the negative impact on the economy of a potential Brexit would keep borrowing costs and interest rates down for a longer time which will mitigate the effect on mortgage borrowers.

Several banks such as Goldman Sachs and Citi have already warned that a Brexit would shed off about one fifth of the value of the sterling. But this could increase the demand for properties in London that are currently priced in sterling by foreign investors as they will become cheaper to them.

While there are a lot of factors at play, many experts agree that the prospect of Brexit causing a collapse to the UK property market is slim.

The biggest threat to the UK property market remains a recession and rising unemployment. With both dangers far from sight at the moment, April’s result is more likely to be just a bump.

Despite the poor April performance, price growth is expected to pick up pace in the quarters ahead. Factors such as strong employment growth, reduced supply, low borrowing cost and rising real earnings are expected to tilt the demand/supply balance in favour of suppliers.

In addition, the flurry of activity in March has also created a shortage in the property market. According to the Royal Institute of Chartered Surveyors, the number of properties listed with estate agents is close to the all time low judging from data that extends as far back as 1970. 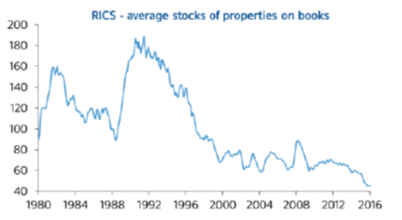 Foreign born workers account for about 12% of the total work force in construction. If Brexit compounded labour shortage, building new houses to meet demands might be difficult. According to data from Home Builders Federation, 41% and 32% of housebuilders consider labour availability and cost respectively, to be a constraint on production. Since it takes years to train a skilled worker, immigration represents the fastest means to meet the current shortage of labour.

In conclusion, prices of property in the Uk market are likely to keep on increasing. While buying activity is expected to gain pace from April, it is generally expected to slow. April and March growth results could be the bottom and ceiling of property price growth respectively.