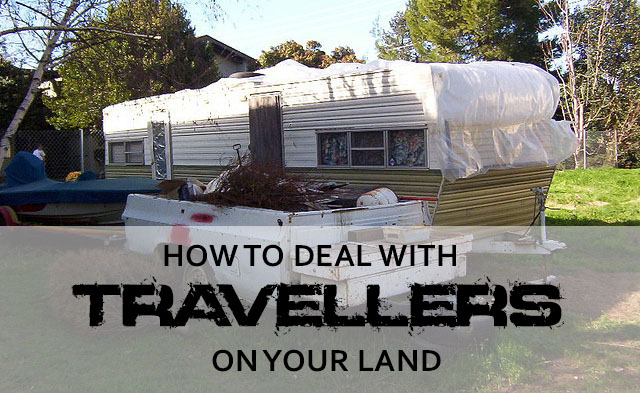 It’s something that the vast majority of landowners dread the most but when travellers decide to make your land their own, you need to know exactly which steps to take to resolve the situation quickly and appropriately.

Media coverages in recent years has raised the profile of the threat posed by travellers, which has increased awareness and knowledge of land security.

Here are the steps you need to take to ensure travellers are removed from your land promptly and never return.

Call the police
If you discover any criminal act has taken place on your land, get in touch with the local authorities. Call the police as soon as possible to obtain a crime reference number.

If you plan on involving a security services contractor in your attempts to remove your unwanted guests, a crime reference number will significantly aid your efforts to have them evicted.

Contact a security services contractor
Travellers often plan ahead when it comes to finding the next piece of land to settle on. They use a method called touring to identify their next site and very often have a number of different locations in mind. Despite no trespassing or prosecution signs being present, many travellers will still relocate to private land and treat it as their own temporary home.

Security services contractors use Common Law to ensure the landowner is given the right to evict travellers and instruct them to leave your land. Whether the travellers choose to stay beyond the time they are given to leave or not, you can contact your security services contractor to take further action. They will then notify the police that they intend to visit the site themselves to serve notice, handing over the crime reference number.

In some cases the police may also attend the site alongside the security services contractor and assist in evicting the travellers from your land. However, the police do not have to accompany the security services contractors, in which case landowners often look to bailiffs. The bailiffs will attend your land on the same day you get in touch if they are notified before 10am. They will attend the site next morning if notified later. Either way, the travellers are given 25 hours to vacate the site they are on.

If the travellers have left…
If the travellers have left your land after being provided with the 24-hour notice, the case is closed. Travellers can be prevented from gaining access to your land in future by installing security blockades and fencing solutions. Travellers will almost always move off after receiving a 24-hour ultimatum, so you shouldn’t have to worry about much after this process is complete.

Many construction contractors incorporate a security services department that deal with travellers on a regular basis. However, traveller sites tend to differ from each other, with some fairly straightforward to deal with and others not so. When serving notice, bailiffs gain an informative view of that the likely outcome will be, so you can use this information to get in touch with the police prior to attempting an eviction.