New analysis of over 1,000,000 job vacancies alongside rental prices, house prices and population figures, has crowned Aberdeen as the best place to live in the UK.

The research carried out by job search engine Adzuna, ranks UK cities based on the number of jobs per person, average salary, rental prices and house prices. With over 3,800 job vacancies currently live, an average salary of £34,747, and just two people per job on average, Aberdeen outranked all other UK cities.

The top 10 best places to live in the UK based on Adzuna’s ranking factors, are: 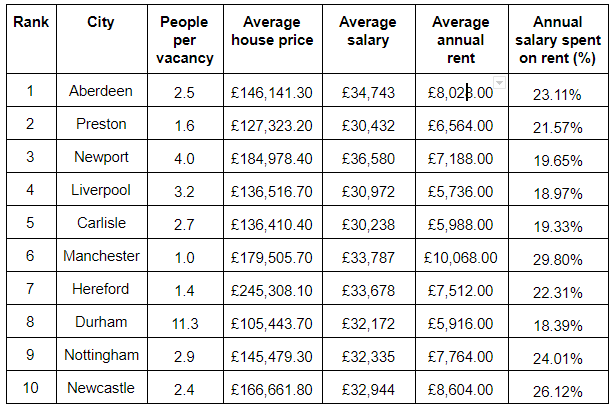 Aberdeen is crowned the best place to live in the UK overall for availability of job opportunities, average salary and house price affordability, however it fails to make it into the top 10 when it comes to value for money for renters. Taking the top spot as the best value city for renters is Hull, where just under 17% of residents’ salary goes towards paying rent, compared to 23% in Aberdeen.

Thanks to its modest house and rental prices Preston came in a close second, but fell short due to a lower average salary than many of the other top 10 locations (£30,432). Newport is the only Welsh location to make it into the top 10 coming in third place, however the amount of competition for jobs prevented the city from taking the top spot. Making up the rest of the top five cities are Carlisle and Liverpool, which are evenly matched in the overall rankings, although Carlisle was found to be better value for money in the rental market.

According to Adzuna’s findings, the places where renters will get the best value for money are: 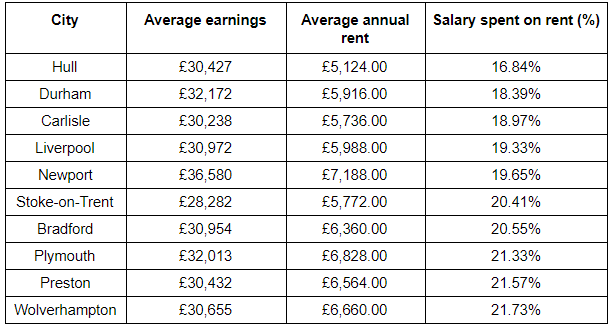 Cambridge was found to be the best city for job opportunities, with over 10,000 live vacancies and just over 3,000 unemployed residents. However, with average house prices coming in at £446,167 and rent prices averaging £1,225 per month (38% of residents’ average salary over the year), Cambridge failed to make it into the top 20 in the overall rankings.

The locations found to be the worst places to live according to Adzuna’s research, are: 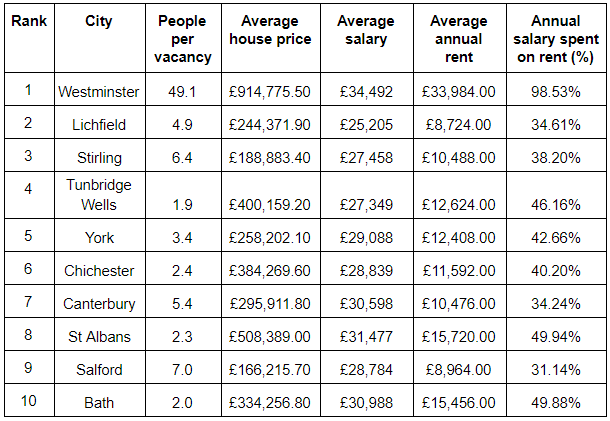 Andrew Hunter, co-founder of Adzuna, comments: “Whilst London was naturally the city with the highest earnings, it was interesting to see more of a regional spread making up the other high-earners, with Cardiff not far behind and other cities like Birmingham and Newport also ranking highly.

“However, we know that finding the best place to live for your needs isn’t always about where you can earn the most money. In fact, our analysis found that some of the highest earning locations offer much less when it comes to job opportunities, or value for money when it comes to paying rent.

“We wanted to share these findings to help job seekers make an informed decision, especially if they are considering relocating.”