If only we could have a peak through their keyholes or windows….well, below we will do just that, with seven celebrity homes which went up for sale in the UK over the past 12 months.

The former Oasis guitarist has had his 6 bedroom semi detached house on the market since 2016. Although, now the price has been lowered from £11.5million down to £8,495,000.

There is a lovely wraparound garden, a conservatory, a private terrace and Juliet balconies. as well as a state-of-the-art gym in the basement and a self-contained mews house at the back.

Read More on this article from Homes & Property.

The Wimbledon home said to have interested them is The Grange, close to Wimbledon common that has eight bedrooms and an indoor pool, it is for sale with Robert Holmes & Co, price on application.

Despite her home’s beautiful interior, the Spice Girls star was made to knock $600,000 off the asking price of her Hollywood Hills home, bringing it to (a still eye-watering) $5.9 million dollars.

This means that while Mel B will still net a healthy profit from the property, which she bought with her former husband for $4.34 million in 2014, it is now a third less than its original nearly $9 million asking price.

Read More in this article from The Telegraph.

Strictly star Shirley Ballas’ house in LA up for sale

Strictly Come Dancing’s head judge has put her luxurious Los Angeles home on the market. The sale comes after reported news of Shirley confirming her move back to the UK permanently, leaving life in the Beverley Hills behind her.

The four bedroom Beverley Hills home is currently on the market with agents Sotheby’s International, for $2,699,000. It’s described by the agent as a ‘one of a kind house located in the heart of Sherman Oaks’ offering ‘resort style living at its finest.’

“Our House” singer Suggs’ Camden House up for sale

Madness’ frontman, Suggs has put his Camden mews house up for sale after purchasing in 1981.

Originally three separate homes, it was later knocked into one big 2,767sq ft space. It’s on the market for £1,595,000 with Chestertons.

The property merges rustic and contemporary fixtures, with three bedrooms and a roof terrace.

But by November that year, the singer had slashed £550,000 off the six-bedroom manor house. However, the Grade II listed property — in 25 acres, with tennis courts, a boating lake, football pitch, wine cellar, pool, stables and a two-bedroom cottage — still failed to sell.

Last year Rod and wife Penny Lancaster, who are selling up to move closer to their sons’ school, dropped the price even further — to £4,725,000. It worked — the house is now under offer.

Read More in this article on the Daily Mail.

The TV presenter and fitness enthusiast put the 17th-century stone mansion she shared with Matthew Robertson, 50, her husband of 17 years, on the market last year after a highly-publicised breakdown of the couple’s marriage.

The Grade II-listed property in the village of Wadhurst, East Sussex, has six bedrooms, a swimming pool, a tennis court and 38 acres of private parkland complete with water features and topiary.

It also comes with private access via a footpath on the grounds, to the local train station, with routes to London taking just over an hour.

Here are more celebrity homes that were previously up for sale…

Hugh Grant’s former bachelor pad was put up for sale at the end of 2016, and it’s still available to buy if you have a cool £10 million in the bank.

We all love a bit of gossip, and that is especially true when it involves celebrities. Why do we find celebrity lives so interesting? We all seem to be fascinated by their lifestyles – and their homes.

With its own lift, this penthouse apartment in South Kensington has a stunning roof terrace which offers panoramic views over the London skyline. From the terrace you can spot the London Eye, The Shard and Battersea Power Station.

Jamie O’Hara might have moved into the Celebrity Big Brother house, but his old property in Sutton Coldfield is STILL up for sale after almost three years.

The house was owned by Jamie and his former wife Danielle Lloyd, who have been trying to sell the six bedroom mansion since they separated in the summer of 2014.

The restaurateur’s former Mayfair pad has been transformed into a £5.25 million penthouse. It was from here he built an empire that attracted celebrities such as Michael Caine, Elizabeth Taylor, Princess Margaret, Marlon Brandon, Mick Jagger and Jack Nicholson.

The flamboyant Irishman lived at 6-8 Maddox Street in the early 1960s and began his career at Odins Restaurant on Devonshire Street.

Are you a Harry potter fan? If so, you must have seen Harry Potter and the Deathly Hallows Part I. It was in this film that the De Vere House in Lavenham, Suffolk was used as Harry’s parents’ house in the fictional village of Godric’s Hollow.

The house, built in the 14th Century, is one of the most historically significant properties in the village. It is believed to have been visited by Henry VII during a hunting trip in 1498, and was later employed to keep the younger siblings of Charles II and James II under house arrest in 1651. 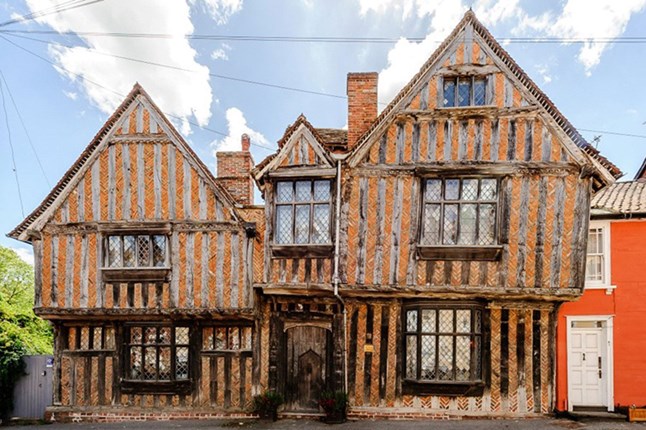 Alexander McQueen’s luxury London home went up for sale for £8.5 million at the end of last year

A multi-million pound refurbishment celebrates the life and work of the iconic British fashion designer, and it is now on the market as a duplex penthouse.

The renowned couturier bought much of 17 Dunraven Street in 2009 for a reported £2.5 million.

McQueen was in the process of turning the townhouse, which had been converted into flats, back into a single residence when he took his own life in 2010.

All photos are taken from their respective articles which are linked.