Today, Boris Johnson will replace Theresa May as Britain’s Prime Minister, with barely three months to go until Brexit. The appointed PM will have a huge impact on the outcome of Brexit, as well as the housing market, the fate of Briton’s landlords, and the PRS.

Though it’s essentially a game of wait and see, Portico Estate Agent’s have forecast how the new prime minister could affect the property market:

Boris Johnson plans to reduce “absurdly high” stamp duty, which could help first-time buyers get on the ladder and invigorate the prime London market.

Boris has made a bold promise to abandon all levies on properties valued at under £500,000. The hopeful PM also intends to lower the top rate of stamp duty tax on the most expensive properties (valued over £1.5m) from 12% to 7%.

Home movers planning on buying property under the half a million-pound mark will also benefit from Boris’ stamp duty reforms. While George Osborne’s changes in 2014 lowered stamp duty for this group, this change would make them exempt from stamp duty altogether.

When George Osborne hiked up stamp duty for homes valued at £925,000 or more in 2014, the top end of the market (particularly prime central London) came to a standstill.

Portico reported on this “standstill” back in 2016, stating that transaction volumes, or the number of homes being bought and sold in the capital, were “critically low”:

“Transaction volume levels … are down 60% in prime central London against last year. With price historically following volume decline, we have now seen the first monthly year on year price decrease of 1.1% in the City of Westminster (September 2015 to September 2016) since the 2008 recession.”

Portico stated that a large part of this drop was explained by a big bounce in sales in the run-up to April this year, when a change to property taxes introduced by ex-chancellor George Osborne came into effect.

The agent states that it’s well-known that stamp duty hampers household mobility, so it’s likely that Boris’ plans to cut the top rate of stamp duty from 12% to 7% could invigorate the top end of the property market again.

“It’s no secret that stamp duty hampers household mobility – and the higher the tax, the more difficult it is for people to move and keep the market moving.

We saw the market go into standstill when George Osborne hiked up stamp duty for homes valued at £925,000 or more in 2014 (below graph). There was a huge spike in volume as investors and second-home buyers rushed to buy properties before the stamp duty changes came into effect in April. But as quickly as volumes went up, they came down again – dramatically – and in Westminster, prime central London, we saw volumes drop to below 100 transactions in a month to a record low of 84.

If Boris does reduce stamp duty, it would certainly invigorate the top end of the property market and we should see transactions increase.” 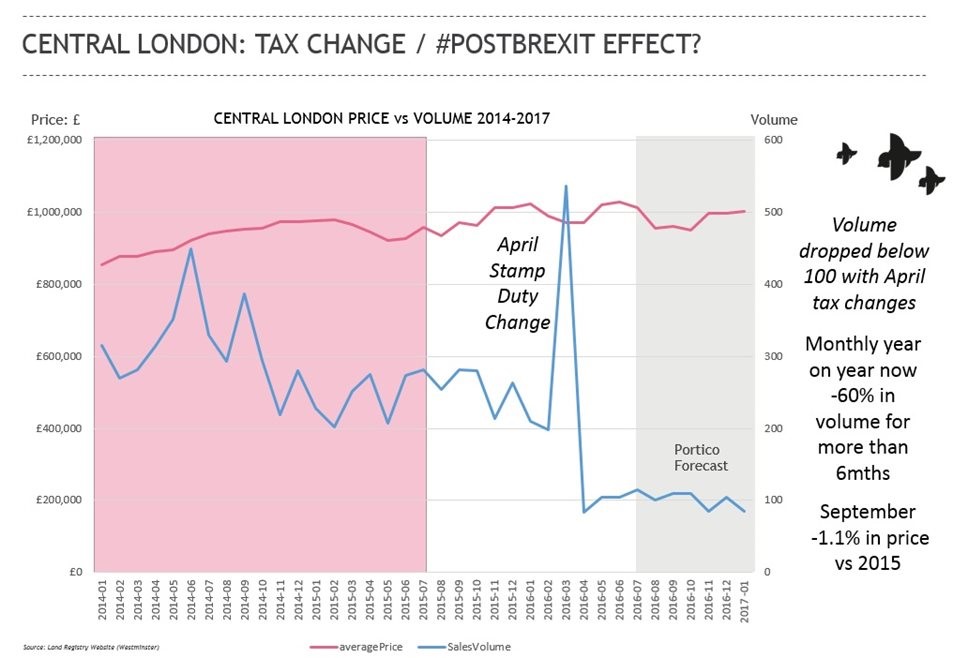 “Uncertainty about our exit from the EU has resulted in a number of buyers delaying their property decisions. However, now that the prime minister has been announced, we expect more people to get into gear.

It’s currently a buyers’ market, so you are likely to get a good deal if you’re prepared to act ahead of Brexit. Still, that doesn’t mean that you should rush to lock in a mortgage now without speaking to a broker first. A professional broker will be able to review your whole finances and advise on how to structure your mortgage finances to achieve the goals you want.”

New research from Vyomm states that prime London property prices will also get a boost as a result of Boris’ plans to reverse stamp duty land tax (SDLT) at the top end of the market.

The firm has stated that this reform could boost home values by around £700,000, as well as spurring on demand from London homebuyers.

Boris Johnsons’ stamp duty reform could also include the 3% levy attached to the purchase of second properties, which could have a huge impact on the PRS – though this was not actually mentioned in the report.

However, if the ‘landlord second home tax’ was dropped, research suggests that just 10% of properties bought last year would have been liable for stamp duty – so the majority of landlords would be considerably better off.

Boris Johnson’s Uxbridge and South Ruislip constituency will be affected by HS2, so it’s no real surprise that the hopeful PM is not an advocate of the high-speed rail line.

Johnson stated that HS2, which will link London, the Midlands and the north of England, will cause “a great deal of difficulties” for the local people. He also spoke of his “anxieties” about the business case and he said he would have a review of the project if elected PM.

Contrary to Johnson’s beliefs, it’s widely thought that HS2 could be key to regional regeneration in the north and Midlands, and anticipation for the rail link is already increasing investment and property prices within the affected areas.

The high-speed rail link will cut journey times by 30 minutes between London and Birmingham, and is the first part of a scheme which will eventually see trains running at speeds of up to 225mph to Manchester and Leeds.

“We sympathise with Boris Johnsons’ anxieties around HS2. Though it’s likely some areas along the route will see prices rise, many locals will have to face extreme noise pollution.

However, there is a great opportunity here for landlords to pick up a good investment property; areas like Barbury will be in close connection with London, as well as near a number of popular prep schools that renters and homebuyers move into the area for.”

Boris once vowed to lie down in front of bulldozers to stop Heathrow Airport’s expansion, and though not as passionate, his feelings towards the expansion remain grave. Johnson recently said he’d review the project if we were to be made prime minister.

A recent report suggested that cancelling plans for a third runway at Heathrow airport could cost the UK economy more than 300,000 jobs. On the other hand, expanding the Airport could also have a negative effect on local property prices.

In fact, since June last year when the proposed expansion was approved, local house prices in affected areas have fallen -2.6% on average.

To find out how much your property is worth,, use Portico Instant Valuation Tool www.portico.com/valuation