The increasing popularity of new-build privately managed university halls of residence among the UK’s fast-growing undergraduate population is reviving interest in the student market among property investors. 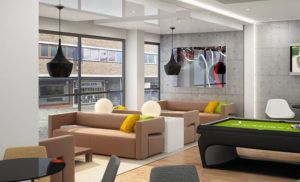 The student market has undergone significant change over the past five years as more undergraduates move out of traditional lodgings in large houses of multiple occupation located in the more affordable areas of university towns and cities.

They are now switching their focus towards new-build privately managed halls of residence that provide secure studio-style accommodation in prime central locations.

In towns and cities with a large student population, these new-style halls typically command up to 75% more rent than traditional student homes. And even in locations with a lower number of students among its residents, rents for private halls tend to be around 20% higher when compared with those generated by HMOs.

A further advantage of investing in the student market is it is almost entirely non-cyclical. Its trends display very little correlation with those in other markets, as was seen when it was one of the very few asset classes to show decent growth during the recession.

In fact, international property group Knight Frank has highlighted student property as the single best-performing asset class in the UK. In the first quarter of 2015, the market attracted investment worth a total of £3.3bn.

And according to the most recent Knight Frank Student Report, total investor returns for student accommodation in the UK averaged 7.8% per year.

And the student market is growing. Over the past 20 years, there have been huge increases in the number of students attending a higher education establishment in the UK.

In 2014, more than 450,000 full-time students started attending a higher education establish in the UK. And that figure is set to increase thanks to a change in the law that means universities will no longer be subject to intake caps when the next academic year begins in September,

It is estimated that the numbers of overseas students studying in the UK will increase by between 15% and 20% over the next five years. Typically, overseas students are more likely to favour the new private halls, with their high specification finishing’s and city centre locations, and in some way it could be said that they have initiated this growing demand for high quality student accommodations.

The starting price for investing in new-style student halls is around £25,000 for a fully managed development with tenants already in place. But many investors prefer to purchase a student property within a new-build development because it allows them to capitalise on marketing incentives such as fixed period guaranteed rent returns.

The fact that many new developments also offer long-term building guarantees provides investors with an additional level of security to the overall investment.

For other investors, the additional security offered by completed and already tenanted project surpasses the appeal of the higher rental returns in the initial period.

It is worth noting that the student accommodation investment sector is still in its infancy and the vast majority of companies operating within it have been doing so for around five years.

If you are considering purchasing a student buy-to-let property, it is advisable to investigate the track record of both the developer and the management company. This is because investors have to rely on them to both deliver the completed project and ensure it is tenanted and well managed.